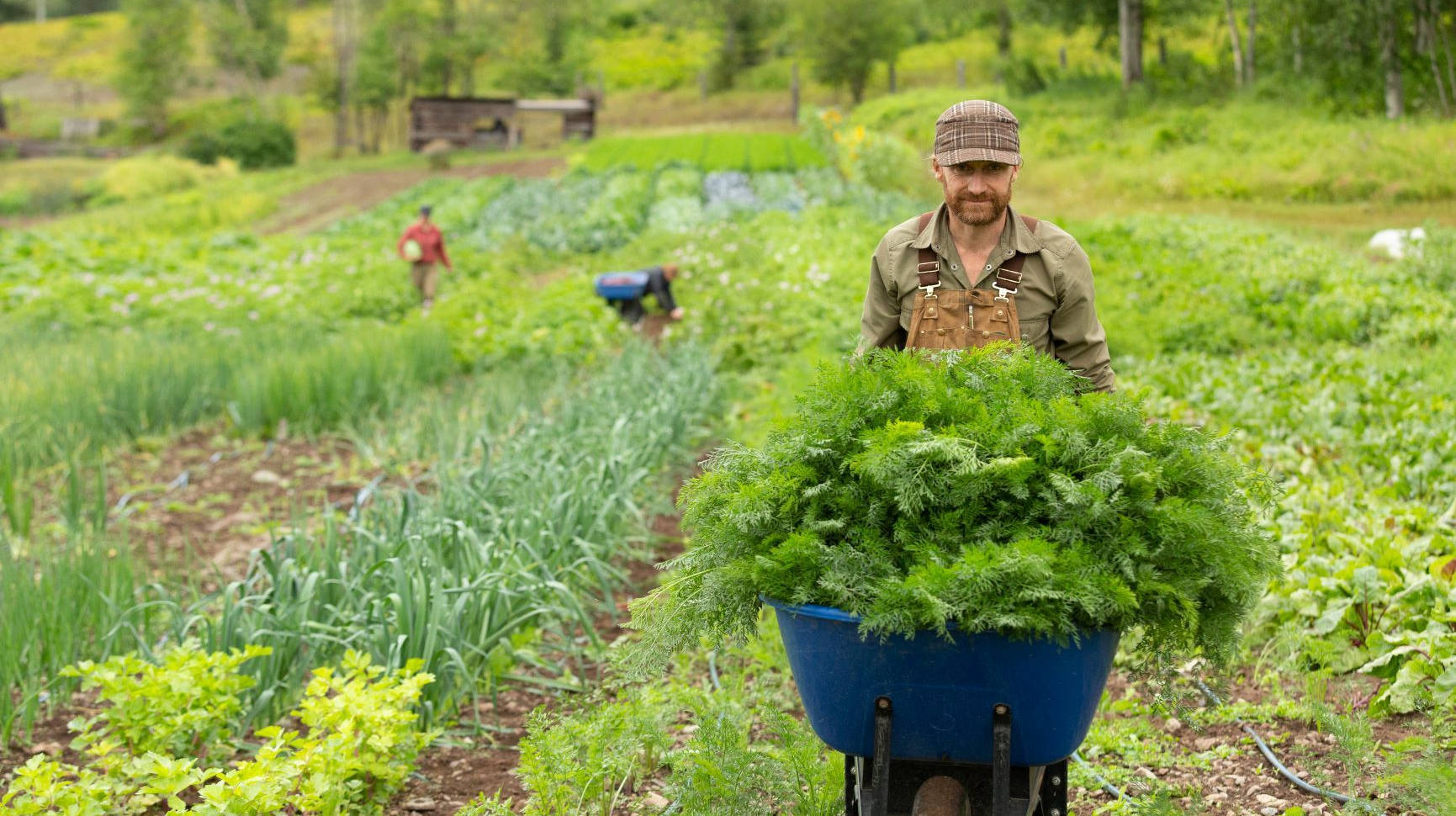 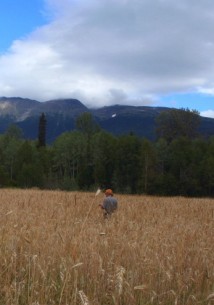 Jonathan Knight has been farming organically in the Kispiox Valley since 2009. A love of growing food, living in wild places, learning old skills, and figuring things out led the way to this historic farmstead on the sunny south slope of Tenas Hill. Prior to sowing the seeds of WoodGrain Farm, Jonathan got his hands in the soil across the country during wwoofing stints and bicycle travels. 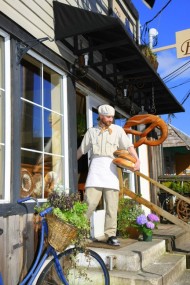 Jonathan is also an accomplished baker and miller, and his past bakery True Grain Bread on Vancouver Island received acclaim near and far:

“Like any food obsessed community anywhere in the world, the heart of the place is the bakery, and Jonathan Knight has set about to reinvent bread baking in the tiny town of Cowichan Bay.”    The Globe & Mail May 2007

“Jonathan Knight established his bakery along the main road, thereby transforming the little village into an epicenter of the artisanal movement on the island.” Gourmet Magazine Aug 2009

After heading north, Jonathan co-ordinated the establishment of the Skeena Bakery in New Hazelton as a social enterprise workplace for people with disabilities. He also helped germinate the Hazelton Farmers’ Market, and continues to serve on the market board as well as with the Bulkley Valley Farmers’ Market. 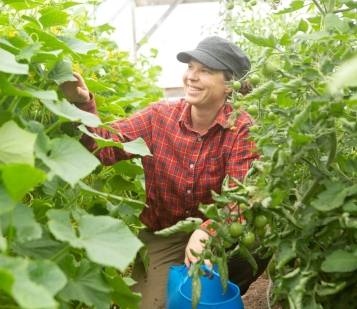 Jolene Swain is best found out in the field. Equipped with a Masters in Biology, and a zeal and curiosity for the natural world, she has roamed extensively throughout BC, Alberta and the Yukon. Her field work has ranged from studying pikas and plants in the alpine tundra around Kluane Lake, to biodiversity surveys in the boreal forest, to research on caterpillars and climate change in the organic orchards of the Similkameen Valley.

Her hands’ desire to spend more time in the dirt led her feet towards the Kispiox Valley in 2015, where she has spent the last four seasons growing organic vegetables for our two local farmers’ markets, an increasing array of seed crops available through the B.C. Eco Seed Co-op, and helping get the hay in for the milk cow and small sheep flock.

Jolene loves visiting diverse farms and farmers throughout the province through her off-farm work as an organic verification officer, and looks forward to connecting aspiring and established farmers and landowners alike, across Northern and Central BC, through her new role as a Young Agrarians Land Matcher for the B.C. Land Matching Program. 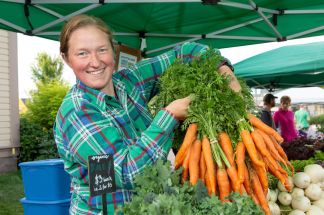 Originally from the Seattle area, Willow Rudiger has called Northern BC home since 2014. Over the last twenty years, she has been involved in all sorts of farming, community gardening, and food security efforts.

After graduating from university with a BA in Environmental Journalism, Willow packed her backpack and headed off on her first WWOOFing adventure on Hawai’i Island. Over the next five years her passion for growing food and learning more about community supported agriculture led her to pursue seasonal work on small farms in Washington state and complete the CASFS Ecological Horticulture program at UC Santa Cruz. She owned a small farm business and participated in her hometown farmers market before moving to Northern BC.

After sampling some of WoodGrain Farm’s famous hakurei turnips at the Hazelton Farmer’s Market, Willow knew it was thyme to get back to her roots! When an opportunity to market garden with Jolene and Jonathan popped up on the Young Agrarians website, she got in touch with the farm right away. 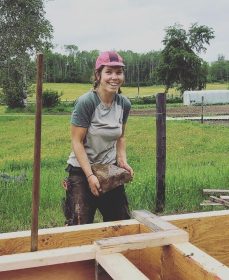 Meira Larsen returned to the Hazeltons this spring to seize the opportunity to participate in WoodGrain’s internship. She grew up in the area and has spent the last decade or so gardening, landscaping, WWOOFing and bike touring in all sorts of places throughout Canada and overseas.

Her goal is to live and farm on a similar scale to WoodGrain, as well as be able to empower folks who need to develop their own skills to grow food for themselves.

With a few horticultural and permaculture certifications under her belt, she’s relishing the chance to join the farm team for a full season, to learn and be humbled and nestle into the Kispiox Valley.

“The farm’s called WoodGrain Farm, by the way. It is a little slice of paradise. The light is always perfect, the wind never blows, the bugs hardly bite.  It takes a long time to get here, but people get here, and then they stay.” 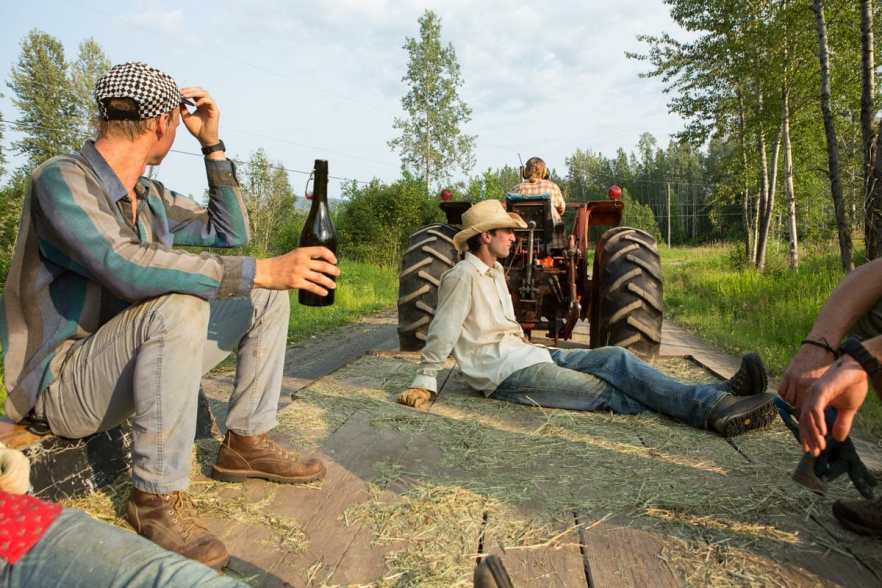 At times there may also be friends, family, wwoofers, and travelling cyclists lending a hand.